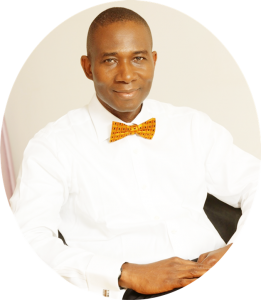 Kudo Eresia-Eke, a seasoned and accomplished communicator and administrator with rich experience in the media, academia, government and the oil and gas industry, holds a PhD in Political Theory from the University of Port Harcourt, and a Bachelor’s degree in Mass Communication from the University of Lagos. He started his communication career straight from secondary school, joining Nigerian Television Authority as a presenter and newscaster. He later served at the Daily Times, the Guardian Newspaper, Rivers State Television, Radio Nigeria, Radio Rivers, and Sunray Group of Newspapers from where he resigned in defence of professional principles and ethics. For years, he was a columnist for the Vanguard Newspaper.

Kudo has a wealth of experience in Public Service, too. He served variously as Rivers State Commissioner for Information and Culture and State Director of the National Orientation Agency, a platform he used to inspire countless youths in Rivers State, and forge consensus on the split of old Rivers State, leading to the creation of Bayelsa State.

He has also enjoyed teaching stints in various universities in Nigeria and South Africa and was the sole founding staff of the Centre for Advanced Social Science, Port Harcourt.
Kudo joined the oil and gas industry in 1998 as pioneer Community Relations and Development Manager for Nigeria LNG Limited and has since then served in other managerial positions including Public Affairs Manager, and Government Relations Manager.

He was the GM External Relations of Nigeria LNG from 2013 and took an early retirement in late 2017 to pursue other interests abroad and locally including driving the agenda of Starlets Academy, Port Harcourt to create worthy student exports to the world. Founder and Director of the over 2 decades old institution, his teachers last year produced the student with the highest score in SAT worldwide i.e 1600 out of 1600- the perfect score. The Academy, which also runs a Foundation Program is associated with nearly 100 top class universities worldwide, especially in North America, Europe and Australia.

He was CEO of Nigeria’s Oil and Gas Foundation, OGIF, which supported the Federal Government’s programme for training and rehabilitation of ex Niger Delta militants. Kudo also served on the Board of the Rivers State Sustainable Development Agency.

He is a thinker and prolific writer with numerous publications spanning poetry, short stories, inspirational and academic essays. Kudo belongs to several professional organizations including the International Association of Business Communicators.

Kudo is married to Joanna. They have four children – two boys and two girls.